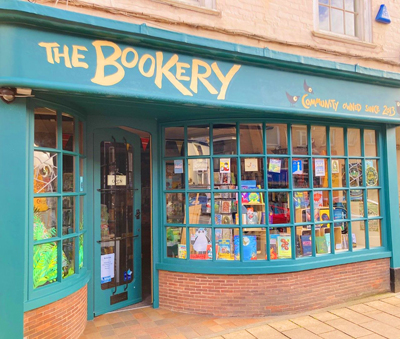 The final line-up for Independent Bookshop Week 2021 (19-26 June) has been revealed today, with hundreds of initiatives both online and in-person marking the annual celebration of independent bookshops across the UK and Ireland, sponsored by Hachette.

Marking its 15th anniversary this year, Independent Bookshop Week invites everyone to support their local indie in any way they can – visiting the bookshop in person, buying from the bookshop’s own website or on Bookshop.org, and joining a virtual or in-store event. The week aims to celebrate the resilience and creativity demonstrated by independent booksellers over the past year, in the face of the multiple challenges posed by the pandemic.

With more indies set to take part in this year’s celebrations than ever before, two independent bookshops are opening just in time for Independent Bookshop Week.

Books and Banter, a children’s books and games shop, opened in Burton Upon Trent on Monday 31st May

Truman Books will be opening its doors in Farsley, West Leeds on Saturday 19th June, the first day of IBW

From author events up and down the country, and some in partnership with Bookshop.org, to window displays featuring spectacular book sculptures by local artists, and from early releases and signed stock to hundreds of National Book Tokens as part of the High Five for Bookshops initiative, Independent Bookshop Week will have something for everyone.

Julia Donaldson will be doing a live virtual event with Wee Three Indies (The Edinburgh Bookshop, Far From the Madding Crowd and Atkinson-Pryce Books), At Home With Four Indies (Booka Bookshop, Forum Books, Linghams Bookshop, and Book-ish) and Steyning Bookshop. Tickets are £5 for the event only, or available for free with a purchase of one of the following books: The Woolly Bear Caterpillar, The Hospital Dog by or The Scarecrow's Wedding (Saturday 19 June, 10.30-11.15am)

To make their shop even more “special” for Independent Bookshop Week, Linghams Bookshop in Heswall (Merseyside) will be partnering with a local book artist from Wirral, Julie Dodd, who creates mesmerising artworks mainly working with recycled materials, including books. Julie’s work will be displayed in the bookshop window throughout the week.

Meanwhile, book artist Emma Taylor will be collaborating with Kett’s Books, a community bookshop run by volunteers in Wymondham (Norfolk) to create a stunning sculpture to be displayed in their bookshop window during Independent Bookshop Week.

Emma’s artworks are inspired by nature and trees, which are a keen interest of the bookshop, as well as part of their their brand and their history. The shop is named after the local historical figure Robert Kett, in tribute to his leading the fight against the king's forces to defend the use of common lands. The tree where the rebels met before marching on Norwich is called 'Kett's Oak,' and an oak leaf forms part of the bookshop logo.

Building on the success of 2020, the Indie Twinning strand of IBW is coming back for a second year, with independent publishers and independent bookshops teaming up to develop bespoke programmes of activity across the country. Confirmed twinnings include:

Usborne Publishing will team up with Rocketship Books in Salisbury, with plans including: a “Find the Duck” trail from Sam Taplin and Simon Taylor-Kielty’s best-selling Poppy and Sam series around Salisbury, leading back to the bookshop; a window display to mark the publication of  Tim Tilley’s debut novel Harklights; Rocketship Books to take over Usborne’s Instagram for a day; exclusive signed stock and bookplates; curated list, blogs and social media assets.

Fitzcarraldo Editions will be twinned with Hastings Bookshop in East Sussex, with celebrations including; a pre-publication event of Alice Hattrick's forthcoming Ill Feelings , including an afternoon reading by Alice in the courtyard; signed stock of recent books including The Appointment by Katharina Volckmer, Fifty Sounds by Polly Barton, Batlava Lake by Adam Mars-Jones and others; a special window display of Fitzcarraldo books for the week.

Magic Cat Publishing will be working with Ivybridge Bookshop in Devon, with plans including a beautiful shop window and other activities.

Neem Tree Press will be twinning with Tales on Moon Lane (London) during Independent Bookshop Week. They will be highlighting Neem Tree Press’s Three Hares Trilogy Book 1 and Book 2 with POS (including fridge magnets!) and bookmarks to give away while stocks last (from Monday 21 June)

And Other Stories are pairing with Gloucester Road Books (Bristol), with initiatives including: a special shelf in the bookshop of And Other Stories staff picks; a gift bundle with an AOS tote bag, free books, bookmarks and more to every customer who buys an And Other Stories book from the shop; signed bookplates, and more.

Jacaranda will be teaming up with October Books (Southampton) during IBW, spotlighting a key title from their catalogue on each day of IBW. In addition, they will be giving away free mystery books with every in-store purchase with their Blind Date With A Book scheme, and will have some limited edition October Books tote bags for the final weekend.

Serpent’s Tail will be twinning with Burley Fisher (London), to celebrate their 35th and 5th birthday respectively. Initiatives include special tote bags and bookmarks; free coffees with purchases of Serpent's Tail books; a curated table with top 10 Burley FIsher picks from the Serpent Tail’s list; a Burley Fisher takeover of the publiher’s Instagram; and a special edition of the Burley Fisher podcast with Serpent Tail’s publisher Hannah Westland.

Saraband Books are twinning specific books with bookshops, and will be dedicating a day to each bookshop throughout the week.

High Five for Bookshops from National Book Tokens is back for a third year, celebrating independent bookshops and all who shop in them. With up to £360,000 being given away, High Five promises to give an even bigger boost to independent bookshops, and put a smile on the face of the customers who continue to support them.

The initiative gives booksellers a simple mechanic to promote Independent Bookshop Week and drive footfall to their stores; each participating shop will receive 100 flyers bearing unique codes, which customers enter online to claim a free £5/€5 National Book Tokens e-Gift card. Booksellers are encouraged to use the free gift in the way that best suits them and their customers, from a surprise for the first people through the doors during Independent Bookshop Week to a reward for members of regular book groups.

Once a customer has registered for their free National Book Tokens e-Gift card, supporting communications encourage them to spend it in the same shop where they received it – with many likely to spend much more than the value of the card. In 2020, the campaign rewarded thousands of loyal bookshop customers, driving footfall and maintaining loyalty during a challenging year.

Brian Bilston, the unofficial “Poet Laureate of Twitter” and author of Alexa, what is there to know about love (Picador) has written two exclusive poems in support of the campaign, celebrating the vital work of indie booksellers. The first poem will be shared exclusively on Times Radio on Thursday 17th June, read by Kate Harris from Harris & Harris Books in Suffolk, while the second poem will be unveiled on the Books Are My Bag social media channels on Wednesday 23rd June, read by Fleur Sinclair from Sevenoaks Bookshop in Kent.

Authors offering signed copies or bookplates available exclusively from indies include: Ben Aaronovitch, offering exclusive signed copies to mark the 10th anniversary of Rivers of London series; Reverend Richard Coles will be doing special bookplates for this latest book The Madness of Grief: A Memoir of Love and Loss ; international best-selling author of The Silent Patient Alex Michaelides will offer exclusive content for indies to mark the publication of his latest thriller The Maidens; rapper, comedian, actor and author Ben Bailey Smith, author of Something I Said, will be doing a special signed edition exclusively for independent bookshops (with extra jokes!), as well as a selection of POS including a character standee, die-cut bookmarks, posters and postcards; Sarah Winman’s stunning new novel Still Life will have an exclusive edition for Independent Bookshop Week is signed, has exclusive Florentine-tile endpapers and an exclusive gold-foil cover; Esther Freud, author of I Couldn’t Love You More, will offer signed bookplates and an exclusive gold-foiled bookmark only available to indie bookshops; Kirsty Capes will be signing copies of her literary debut Careless; Susannah Wise will do signed copies and POS kits for the publication of her debut novel This Fragile Earth; Carolyn Dunster, author of Cut & Dry: The Modern Guide to Dried Flowers will be offering signed copies of her book.

Andersen Press will be offering independent bookshops exclusive early release of two of Mr Benn titles by David McKee – Mr Benn 123456789 and Mr Benn Big Top – ahead of general release in July.  Canongate will be doing an early release exclusively for indies of I Get Loud by David Ouimet, ahead of general release on 1 July. Oi Aardvark from the popular series Oi Frog and Friends (Hachette) will be releasing 500 early copies for IBW. Pizza Girl (HQ) by Jean Kyoung Frazier will be released early exclusively for indies, together with exclusive Pizza Box POS.

Rob Biddulph, author of Dog Gone, said: “I think indie bookshop owners really are the unsung heroes of the pandemic – they’ve gone above and beyond the call of duty to keep their communities serviced – really heroic efforts on many, many people’s parts and it’s been lovely to see how communities have rallied around their bookshops too, to keep them going. If you give a little love, it and it all comes back to you, in the words of Bugsy Malone.”

Emma Bradshaw, Head of Campaigns at the Booksellers Association, commented: “We’re inviting book buyers to “shop local” this Independent Bookshop Week, and celebrate the unique experience that can only be found by shopping with a brick and mortar independent bookshop. There is a wealth of activity going on up and down the country, in-store and online. There really is something for everyone.