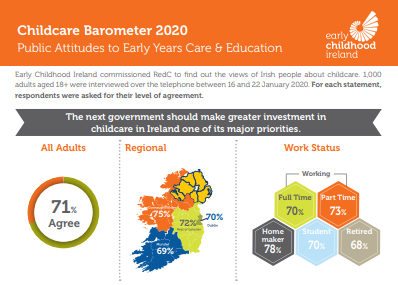 The third annual Early Childhood Ireland Childcare Barometer, published today, indicates that 71 per cent of adults in Ireland want the next government to prioritise greater investment in childcare.

84 per cent of adults strongly support the establishment of a single, dedicated agency to oversee early years and school age care in Ireland. This would replace the current system where childcare providers are required to report into seven different government agencies and Departments.

The Childcare Barometer 2020 also reveals that:

The trends reflect the results of previous editions of the Childcare Barometer in 2018 and 2019, which also showed wide public support for early years.

Ms. Byrne continued, “Childcare is a redline issue for families all over Ireland. Decades of historic underinvestment have led to a status quo in which providers are underfunded, staff terms and conditions are poor, and parents face high fees. This year’s Barometer reflects a broad desire for a better approach to childcare in this country, including the establishment of the first ever dedicated agency for our sector.”

Ms. Byrne concluded, “While we await the formation of the next government, the Early Childhood Ireland Childcare Barometer 2020 presents a ready-made mandate to political leaders. It is clear that the care and education of our youngest citizens is hugely important to Irish families. We urge all parties to closely note these findings and to commit to a 10-year programme of radically enhanced investment in childcare. The next government must make this a priority.”